We are totally stoked to get back into the recording studio & start work on the new material. We're planning to nail at least 4 brand new tracks during this session, of which one will be released as a FREE download Single. We'll also bring you some studio updates on this website, along with song titles & some other insights...  so keep your eyes on FALLING-RED.COM

We are extremely pleased to announce that we will join STEEL PANTHER as Special Guests during their UK tour this November. This tour is already close to being completely Sold Out and is one of the most exciting opportunities ever presented to Falling Red.  We look forward to catching up with our loyal fans who have supported us over the years at these amazing venues! 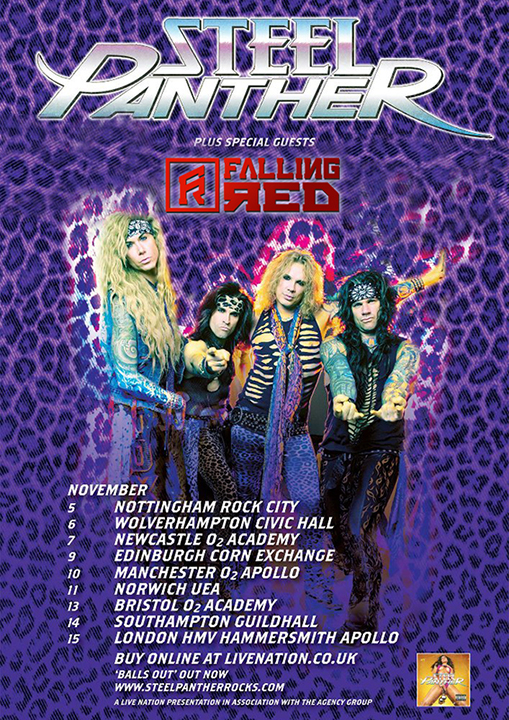 >We have been busy behind the scenes writing for our second album but we feel it's time to let you all know about some of the exciting shows we have coming up before the end of the year. No matter where we play in the World, The Brickyard in Carlisle will always be our Whisky a Go Go. The energy we feel up on the Brickyard stage from all those hot & sweaty writhing bodies in the audience is like a shot of Jagermeister every damn second we play!  So we're bringing out the most insane show we can legally put on that stage for a very special Christmas Show on 15th December. We will be hitting you hard n heavy with our new songs from our forthcoming new album due for release in 2013. And as always we've invited some of the very best emerging new bands on the UK Rock scene to join us for what will be a night you will never forget. 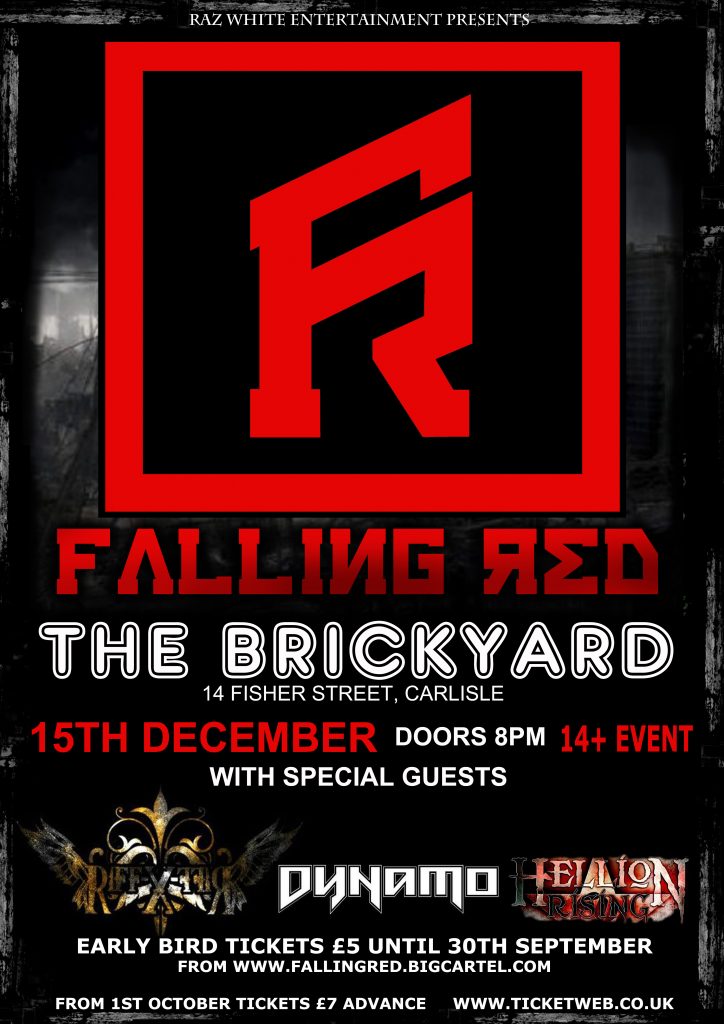 END_OF_DOCUMENT_TOKEN_TO_BE_REPLACED

Falling Red shake up their live set list & bring back some favourites from their critically acclaimed debut album Shake The Faith for UK Summer Shows. Vocalist Rozey states that songs such as 'Thrive' & 'You Were Out To Get Me' are back by fan demand.  'We struggle to fit everyone's favourite songs into a 45 - 60 minute set already, & now we have 4 or 5 new songs we enjoy playing live so much, it's just getting harder & harder. So this Summer we'll drop a few that we've played for the last 2 years & bring back some other favourites that we get asked to play on a regular basis.'

This is likely to be Falling Red's last batch of UK gigs this year as the band will set about writing & recording their highly anticipated 2nd album. Drummer Dave Sanders is enthusiastic at all the prospects that lay ahead. 'We've been contacted by some of the biggest Record Producers in the World who have shown a lot of interest in working with Falling Red. Our next record is guaranteed to be a monster. We won't settle for anything less. We have some great new songs already in the bag but we will be looking to bring a new dynamic to our sound & image. Like I said... we're unleashing the monster. We need to up our game & keep getting bigger & better! We're planning to put together an amazing show as a back drop to our music. I'm currently out in Hollywood & spent last week in Las Vegas so the ideas I'm coming up with are monumental!'

Available to buy now:
From Our Online Store

Sign up for our free newsletter to get all the latest news and info on Falling Red.